Gums Bleeding? A Trusted Dentist in Canton Explains Why 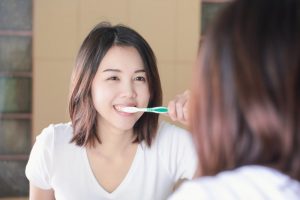 Are your gums bleeding when you brush or floss? Do you think that’s normal? Would you get your ears checked out if they started bleeding? Surprisingly, around half of Americans have bleeding or red gums, but they don’t get treated with the same concern as other parts of the body. Bleeding gums can advance to more serious conditions like gum disease if the symptom is left untreated, which is the leading cause of tooth loss for adults. Read more to find out what your trusted dentist in Canton has to say about bleeding gums and how to prevent gum disease.

Why Are My Gums Bleeding?

Some people think it’s normal for gums to bleed when brushing or flossing, but usually bleeding is a sign of a problem. The most common reason for your gums to bleed is that plaque builds up along the gumline and forms into tartar. Tartar contains germs that attack the healthy tissue around the teeth which causes irritation and bleeding. This is usually a sign of the earliest stage of gum disease: gingivitis.

Gingivitis can be resolved/reversed using good oral hygiene, but once it progresses into gum disease you will need serious treatment from your dentist. Tartar can only be removed by professionals, and it builds up in your gums if patients aren’t practicing oral hygiene properly, eventually separating the tooth from the socket which can lead to tooth loss. If you notice that your gums are bleeding, contact your dentist before it gets worse and turns into gum disease.

What Can Cause Bleeding Gums?

Although there are a lot of factors that could cause bleeding gums, let’s look at the most common causes:

What Can I Do to Improve My Gum Health?

Visiting the dentist is your best bet to better your gum health. However, there are some steps you can take before going to the dentist:

Even though you now know the causes of bleeding gums and what you can do to help them, seeing your trusted dentist soon is the best way to restore health to your overall smile.

Dr. J.D. Robison is a Michigan native who is dedicated to caring for his patients. He takes continuing education courses to make sure his office is always using the best technologies and procedures. He is ready to help any troubles you may be having with your gums and will provide the best treatment for your specific situation. He currently practices at Robison Dental Group where he can be contacted by phone at (734) 453-6320 for any questions or comments.

Comments Off on Gums Bleeding? A Trusted Dentist in Canton Explains Why